The MICHELIN Guide has developed an international barometer to facilitate analysis of the impact of the Covid-19 crisis on Michelin Starred restaurants.

“By creating this barometer, we want to take the pulse of global gastronomy in order to inform and build awareness of our ecosystem. We hope that this evidence will highlight a sector that radiates economically far beyond the doors of restaurants”, commented International Director of the MICHELIN Guides, Gwendal Poullennec, on May 19 when the barometer was issued.

Each week, the barometer will record the number of Michelin Starred restaurants which are open and will present the information for 35 destinations. The integration of establishments is based on a specific criterion, as restaurants must demonstrate that they are open at least three days per week to be included. Every Tuesday evening, data from the previous week will be updated and a qualitative comment will analyse the situation. The barometer was launched in week 10 of 2020 (02/03 – 08/03).

The tool is designed to provide both the food service and wider tourism sectors with a real-time overview of the rate at which Michelin Starred restaurants across the world are reopening.

With its strong international presence, the MICHELIN Guide is calling on the support of its specialists to update the tool. Inspectors of the Guide are leveraging all their local gastronomic expertise and knowledge to gather information. Depending on the situation in each country, restaurant data will be collected either in the field, by phone or through digital research. 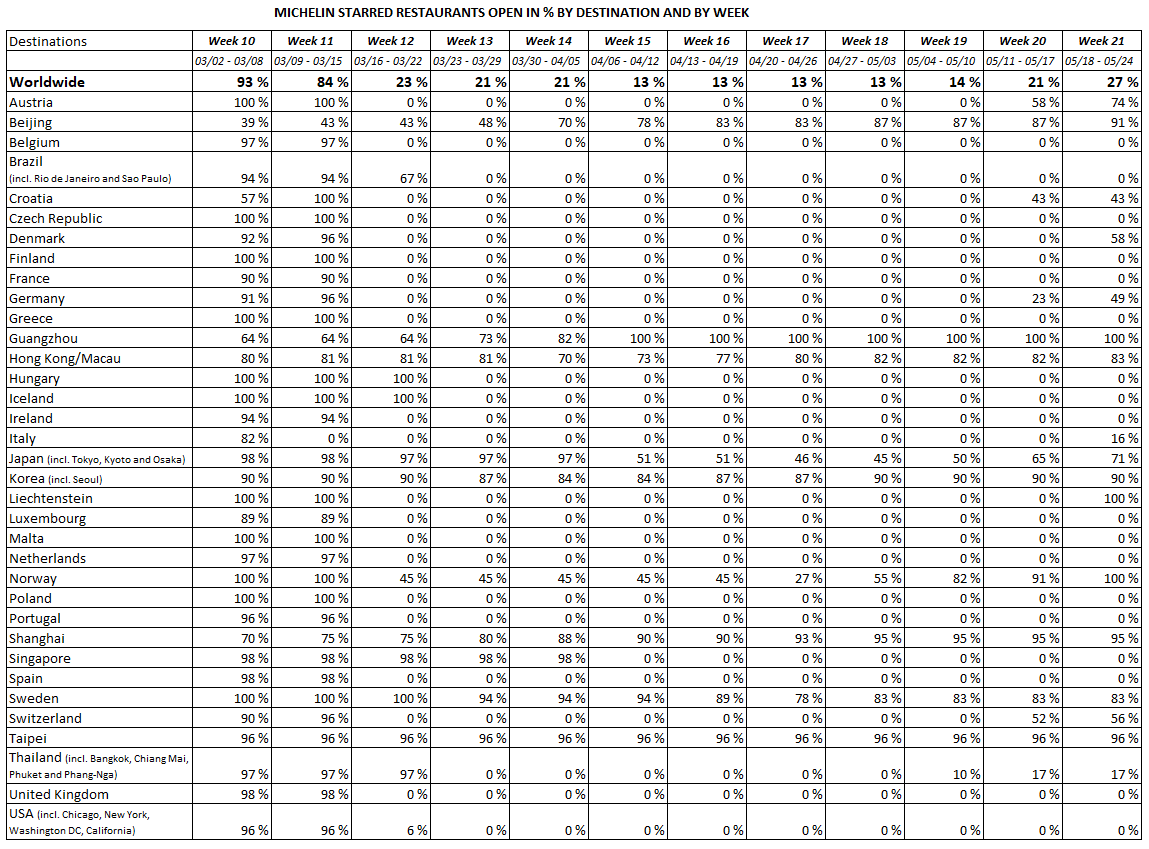 In Europe, restaurants have started to reopen in Austria, Germany, Switzerland and Croatia – as well the first restaurant in Italy. In Asia, the situation continues to progress, especially in Japan with more small restaurants run by local chefs reopening.

Looking to actively support the world of gastronomy during this period of crisis, the MICHELIN Guide will make the results of its barometer available on its website: www.www.argharts.com.

The best of the MICHELIN Experience in your inbox

Stay on the top of the best restaurants, offers, lifestyle, and events recommended in our guide cities.

"Good morning, everyone, First of all, on behalf of the whole MICHELIN Guide team, I want to express my deepest sympathy for the families and loved ones...

MICHELIN Guide Germany 2020: a three star establishment in Berlin for the first time

With 37 new one-, two- or three-star restaurants and 23 new Bib Gourmand establishments the MICHELIN Guide Germany 2020 once again demonstrates its great culinary diversity.

Keep Exploring - Stories we think you will enjoy reading

A UK Michelin Inspector wants his old life back

What Makes a Great Dish?

A UK MICHELIN Guide Inspector reveals his best one ever

Why I Love Restaurants by a UK MICHELIN Guide Inspector

Michelin is pleased to unveil the new selection for the fourth edition of the MICHELIN Guide Croatia 2020. With this selection, the MICHELIN Guide celebrates the Croatian culinary scene and demonstrates its richness and diversity with four outstanding new addresses.

The First MICHELIN Guide Malta Has Been Launched

We use cookie to elevate your user experience, perform audience measurement and enhance the quality of our service. By continuing to browse our services, you accept the use of such cookies.

Receive the latest MICHELIN Guide stories, most exclusive restaurant offers and events from your city and beyond.